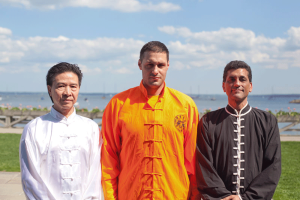 Jonathan Rivera has been studying martial arts and fighting theory for over 21 years. He began his training at the age of 11 in Judo. One year later he switched schools to study under Grandmaster Min Hur, Grandmaster Kim and Grandmaster Sun in the Korean art of Tae Kwon Do. He attained a 4th degree black belt in Tae Kwon Do & Hapkido principals by the age of 16, earning up to recommended black belt from Grandmaster Min Hur directly, than from 1st degree to 4th degree under Grandmasters Kim & Sun. He trained briefly in Kenpo Karate and trained formally in Brazilian Jiu Jitsu and Mauy Thai.  Mr. Rivera is a assistant instructor in Shaolin Kung Fu, Chen style Tai Chi and Qi Gong under Grandmaster Cheuk Ho Kwong, assistant instructor of Northern Praying Mantis Kung Fu under Sifu Gun Orachan and he is the current Sifu and co founder of the Chinese Mix Martial Art System. Mr. Rivera also has trained in the study of Shaolin Long Fist, Kung Fu Wu-Su, Ying Jow Pai, Bak Sil Lum, Bagua, Hung Gar & Yang Style Tai Chi for his personal knowledge.

In January of 2015 Jonathon Rivera obtained the rank of Sifu in the Shaolin Curriculum from his teacher Sifu Cheuk Ho Kwong and has been authorized to teach and run his own school. It is well known that Sifu Jonathan Rivera and Sifu Phil Tambakis are the only two to ever reach the rank of Master under Grandmaster Cheuk Ho Kwong.